“The world around us has failed to sustain our humanity, our spirituality. The deep woe inside black metal is about fear that we can never return to the mythic, pastoral world that we crave on a deep subconscious level. […] We are weak and pitiful in our strength over the earth in conquering, we have destroyed ourselves. Black Metal expresses disgust with humanity and revels in the misery that one finds when the falseness of our lives is revealed. (Wolves in the Throne Room 2006 – Source: Nocturnal Cult)”

I’m certainly not going to undertake the task of “defining” what Black Metal is and what it is not. It is something that exists beyond such simple definitions. However, one aspect I understand about some forms of Black Metal is that it evokes a feeling of despair and darkness – a feeling of living in dark times. There is an idea that humanity has failed, and we are disconnected from the primal vitality of our own nature.

The great heroes of our mythology mark a golden era where man was molded out of harsh winters, deep forests and nature’s lessons into the stuff of legend. Yet we today are shallow beings, with shallow roots, living in environments constructed from plastic and chemicals. We ourselves are just brief shadows of the blazing torch of our ancestor’s glory.

Ragnarok and Kali Yuga predict a great reckoning where a tidal wave of death and destruction will erase the errors of this time, and carve a new, verdant green world out of the flesh and blood of the old. The last living Gods will die fighting the Titans of chaos, but in the end a few Gods will survive to usher in a new and better world. At least this is my personal reflection. Black Metal is a reflection of today’s Dark Times – and almost a yearning for a coming destruction to wash it all away.

This is something that can’t be explained in mere words, but is understood in the subconscious by listening to the music itself.

Mother north – how can they sleep while their beds are burning ?
Mother north – your fields are bleeding
Memories…The Invisible Wounds
pictures that enshrine your throne (gone?)
A Future benighted still they are blind
Pigeonhearted beings of flesh and blood
keeps closing their eyes for the dangers that threat…ourselves and our
nature
And that is why
they all enrage me
Sometimes in the dead of the night I mesmerize my soul
Sights and visions prophecies and horror
they all come in one
Mother north – united we stand (together we walk)
Phantom north – I’ll be there when you hunt them down
(Lyrics Page)

Anilah sounds to me like a mix of Wardruna, Dead Can Dance, Progressive Rock and Shamanic chanting.

Anilah is the musical project of vocalist and composer Dréa Drury, a musician who hails from the Selkirk Mountains of Western Canada. Her music is influenced by traditional shamanic sound practices, sacred chant, dark tribal and Indian Classical. She has studied the art of using the voice as a healing modality with sound healers and shamans from across North America. Even listening to her music on YouTube makes me feel more relaxed, so it must be working. Her unique sound includes elements of progressive rock and dark ambient chanting.

“The reason I use ritual and ceremony in a creative context is to help dissolve perceptual boundaries, and to enhance my ability to hear in a different way. Usually this involves actively creating a trance state through pranayama, kriyas, or mantra.”

She also says the following about nature:

“When I am walking through the forest and allow myself to open to the larger conversation that is happening, I feel myself filling up with the sheer grace of being, and literally have no other option but to express my gratitude – and this happens in the form of a song or melody. So to rephrase: I breathe nature in, I breathe melody out. My creativity takes this form.”

Recently I had a chance to talk with this medicine woman of sound on Facebook. Here are her responses to my following questions:

MG: How long have you been playing music, when and how did you pick it up?

DD: I’ve been playing music ever since I could sit at a piano – started studying with my grandmother at 5, then moved on to classical training at 13, did my degree in music at college and then did private apprenticeships with my vocal teachers Ali Akbar Khan and Silvia Nakkach afterward. So yea…have been at it for a long time  Always was a musical creature, couldn’t help it..

MG: I’m curious, who are your musical influences?

DD: I have many, but notable ones are: Wardruna, Tool (all of Maynard James Keenan projects), Dead Can Dance – Lisa Gerrard, Bjork, NIN, Chelsea Wolfe. Also listen to tons of avant guard choral/classical music, from composers like Hildegard Von Bingen, Bulgarian Women’s Choir, and countless artists in the Indian Classcial Genre like Raga.

If you would love to hear more Anilah, check out the videos and links below: 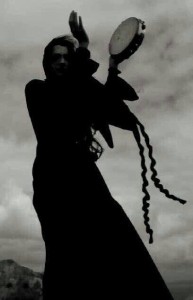