Celtefog – The Rain Is Coming From The North

Damn. When Greece makes black metal they definitely know how to make it dark and intense. Another big Greek Black Metal band to pay attention to is Rotting Christ.

The style of Celtefog also reminds me of the style of atmospheric black metal bands from the American North-West, like Agalloch. 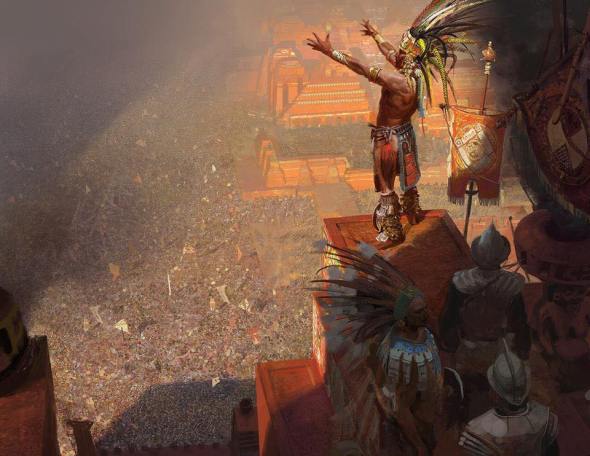 The following “Song-Poems” are taken from the Cantares Mexicanos, a late 16th-century collection transcribed by a Franciscan monk, Bernardino de Sahagún – of  Náhuatl-language (Aztec) poetry known as “flower and song” (” xóchitl in cuícatl “):  stylized, symbolic poem forms composed and performed by nobles – including kings.   These song-poems were believed to be carriers of sacred ritual energy. (Original Source: “War is Like a Flower“)

To the God of War:  Huitzilopochtli

Huitzilopochtli, the Warrior,
He who acts on high
Follows his own path.
Oh marvellous dweller among clouds,
Oh dweller in the region of the frozen wings.
He causes the walls of fire to fall down
Where the feathers are gathered.
Thus he wages war
And subdues the Peoples.
Eager for war, the Flaming One descends,
He rages where the whirling dust arises.
Come to our aid !
There is War, there is burning.
Those Pipitlan are our enemies…

Huitzilopochtli: Aztec god of War, from the Náhuatl words for

known for its aggression, daring, and persistence

Pipitlan: a people to the south of Tenochtitlan (capital of the

Explanation of Terms: **These hearts, ripe fruit for harvest  –  a reference to the

human hearts that must be offered to Tonatiuh – the Sun god –

to ensure he will make his daily journey across the sky;

Waging War was the surest method to get them…)

Where are you going? Where are you going?
To war, to the sacred water.
There our mother, Flying Obsidian,
dyes men, on the battlefield.
The dust rises
on the pool of flame,
the heart of the god of sun is wounded.
Oh Mactlacueye, oh Macuil Malinalli!
War is like a flower.
You are going to hold it in your hands.

Explanation of Terms: Mactlacueye  –  volcano north of the present-day city of Puebla;

Samhain is the ancient Irish festival that became Halloween as we know it.

“The Celts believed the year was divided into two parts, the lighter half in the summer and the darker half in the winter. Samhain, or Halloween as it is now called, was the division between these halves. The Celts believed that the veil between our world and the other world was thinnest at this time. Oíche Shamhna (October 31) is Halloween and Lá na Marbh (November 1) is the Day of the Dead, or All Saints Day, when those who have passed away are remembered.

According to the American Folklife Center at the U.S. Library of Congress, Celts wore costumes to confuse the spirits now roaming our world and to avoid capture. (Irish Central)”

Want to learn more about Celtic Halloween legends? Read the rest of the article at Irish Central.