This is a side project of  Kataklysm’s Maurizio Iacono.”Ex deo” is Latin for “from/out of God”. So, if you enjoy Kataklysm, you will probably love rocking out to this Roman Metal project as well. 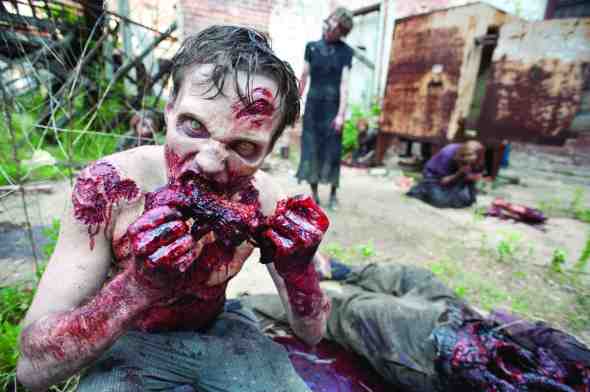 Hungry for horror? Looking for some brutal, metal tunes to crank as you bash open zombie brains? Look no further. We got what you need.

Ramesses – Baptism of the Walking Dead

Review: Erie, haunting and infused with droning horror. I give this song 7 zombie brains out of 10.

Nile – Eat of the Dead

Review: How can you not love this deliciously brutal song? It punches you in the face with riffs that are both powerful and technically written. The vocals are guttural and grotesque – like the excruciating cries of a man being mummified alive. I give this song 8 rotting corpses out of 10.

Review: You say this isn’t a zombie song? I thought Jesus was a zombie. Doesn’t he come back from the dead? Also, I love Vader and wanted an excuse to post one of their songs. Their vocals are so diabolically dark and evil – the vocalist sounds like he gargles glass and bat’s blood for breakfast. This song definitely gets 8 upside down crosses out of 10.

Kataklysm – The Night They Returned

Review: Gotta love those Kataklysm drums. Their drummer is a beast. This song is a good balance of brutality and ominous dread. It gets 7 decayed tomb stones out of 10 from me.

Review: Any self respecting metal head who is not familiar with this song should get their face smashed in by a hammer. This is a classic Death Metal hit. I give this 9 skulls out of 10. Yes, I’m biased for classics.

Review: Holy shit I love me some priest! This is probably my favorite zombie song hands down. Chock full of punching riffs, great melodies and dynamic-chilling Halford Vocals. If I were stuck in a zombie apocalypse, I would love nothing better than to kill the living dead with priest blasting out of my speakers. Than I would ride away with Halford on his motorcycle and we’d have a fun platonic time (since he plays for the other team so to speak). This song gets 10 blood soaked axes out of 10 baby!