Basics of The Yazidi Religion 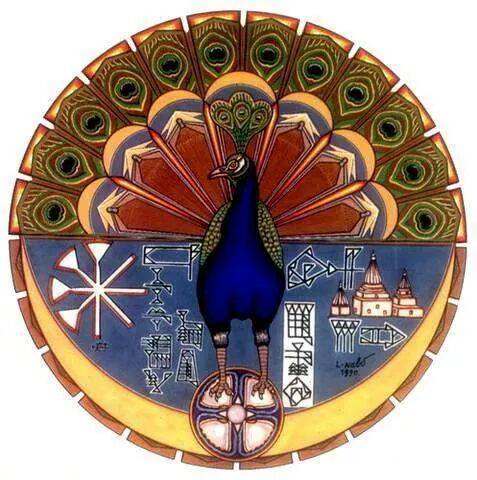 The Yazidi religion is believed to be around 6,000 years old in fact. Yet throughout their long history they have faced 72 genocides and soon they may unfortunately be facing genocide number 73 at the hands of the group formerly known as ISIS (Which now calls itself “The Islamic State”). Why all the hate towards this small, but ancient group of people? This is due to one major misconception about their religion – the idea that they worship Satan. Not only do the Yazidis not believe in a devil, but they don’t believe in hell either. In fact, the evil Satan is more of a reality in the Judeo-Christian religions than for the Yazidis.

GOD’S HIGHEST ANGEL IS A SAVIOR RATHER THAN A DEVIL

The reason for this misconception is because they believe that God created the Earth and designated seven angels to preside over his creation. The highest of these angels is Tawsi Melek, who is also known as the “Peacock Angel.” He is the primary figure in the Yazidi religion and is the one who filled the Earth with colorful things, such as flora and fauna. Yet this mighty Melek is similar in some aspects to Christianity’s Lucifer and Islam’s Shaitan. When God created Adam, he asked his angels to bow down to the humans. All angels obeyed except for Tawsi Melek, who replied, “How can I submit to another being! I am from your illumination while Adam is made of dust.”

The key difference however, in the Yazidi religion, is that Tawsi Melek was right not to bow down to the humans, and he was right to stand up to God. He was not thrown into hell. Instead he descended to Earth and wept for all the pain in the world. His tears ended up extinguishing the fires of hell. Thus, the Yazidis do not believe in a hell with a devil, but rather they believe that evil is man-made. They hold that the source of evil is in the heart and spirit of humans themselves, not in God’s highest angel. In the Yazidi religion, Tawsi Melek is a bringer of knowledge and life. It is interesting that Lucifer is also a bringer of knowledge in the Christian religion – yet this aspect of Lucifer is seen in a negative light by the Christians, while Tawsi Melek’s knowledge is mainly a positive force in the world of the Yazidis.

When Tawsi Melek descended to the Earth to make our world more colorful, it is believed that he descended to a site known as “Lalish,” which is situated in Northern Iraq. After Melek descended to Lalish he met with Adam and turned him towards the sun, telling him that it was a symbol of the creator. He then added that Adam should pray towards the sun daily and taught him a prayer that all humanity should chant for the creator. Most Yazidis pray 3 times a day and most Yazidis also make it a goal to go on a pilgrimage to their holy site at least once a lifetime. 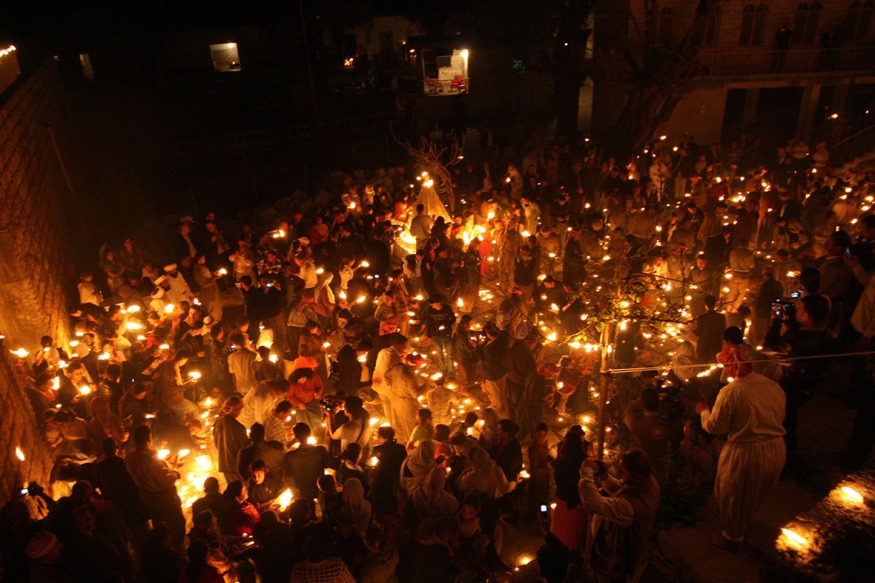 Wednesday is also a holy day of the week for the Yazidis and Saturday is a day of rest.

A BELIEF IN REINCARNATION 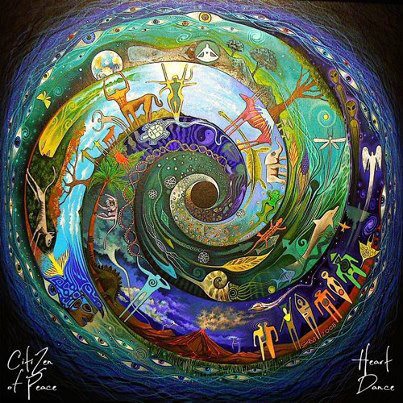 So if evil people don’t go to hell, where do they go? Much like in Hinduism, Yazidis believe in the purification of the soul through a series of lifetimes. If a soul is pure, it will ascend into heaven. However, if someone lived a truly evil life, they will be reincarnated as a member of a different religion. The Yazidis are very proud of their own traditions and ethic group, which means that being cast out of the Yazidi ethnic and spiritual lineage is one of the harshest punishments imaginable for their people. In fact, Yazidis believe in only marrying within their ethnic pool, and narrow that requirement down even further to only marrying within their caste. 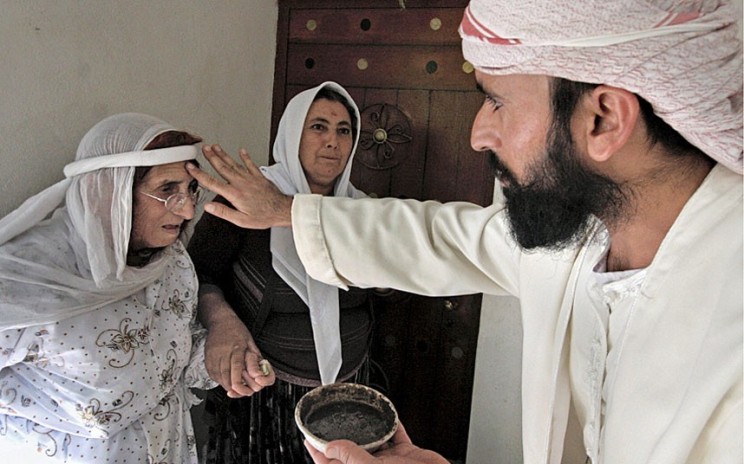 (A Yazidi man healing a woman)

Having a caste system and believing in reincarnation sounds very Hindu inspired. This is no accident. It is believed that the Yazidis migrated to India after a major flood that happened 6,000 years ago. Then about 4,000 years ago they migrated back to their homeland in Northern Iraq. In fact, the Yazidi religion has similarities to Hinduism, Judaism, Christianity, Islam, Zoroastrianism, and Mithraism. It is probably because the Yazidis have encountered and lived among these people over the last 6,000 years of their existence, but due to their tight ethnic bonds – formed a unique religion to fit their people.

WHEN WAS THE YAZIDI RELIGION TECHNICALLY FOUNDED?

This is an update I decided to add after publishing the article. It’s a bit confusing because I state that the Yazidi religion is 6,000 years old. Some have argued with me that the Yazidi religion can’t be that old, considering that it has Islamic customs. However, one must realize that the practice of praying 5 times a day was not unique to Muslims. In pre-islamic times, it was a normal practice for many Middle Eastern cultures who bowed and prayed to the various phases of the sun throughout the day – including the ancient Egyptians and Zoroastrians.

Also, one must understand that the Yazidi religion is a fluid religion that has evolved and grown over time as a result of their contacts with other people. Much of what they believe today was codified in its current form in the 12th century A.D. by the reformer known as Sheikh Adi. Many Yazidis consider him to be an Avatar of the angel Tawsi Melek and his tomb is at the holy site of Lalish. However, even though its most recent reforms were established in the 12th century, many of the basic ideas are thousands of years old. 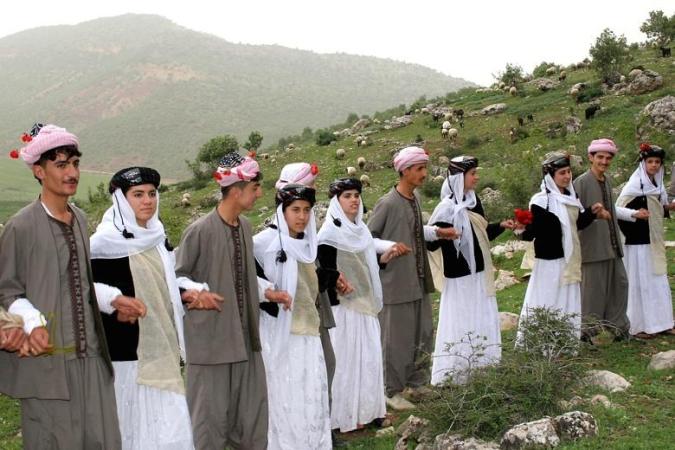 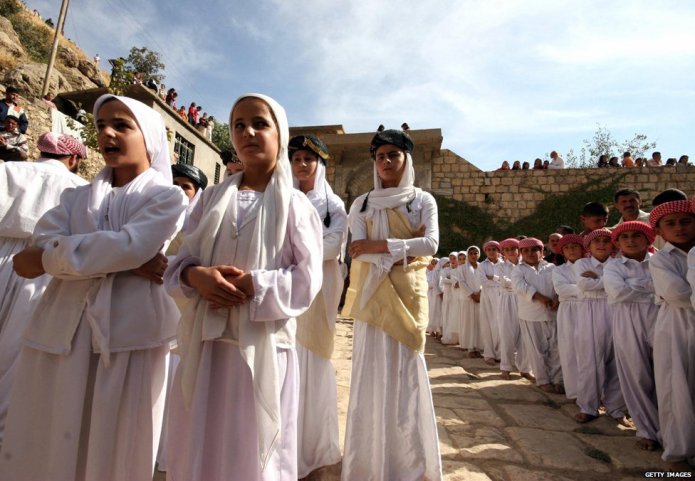 As mentioned in the introduction, Yazdis are a very small ethnic and religious minority. There are only 700,000 Yazidis in the world, and 600,000 of these Yazidis live in Iraq. Today the terrorist group that calls itself “The Islamic State” is terrorizing and killing these ancient people, along with driving them off of lands they have occupied for thousands of years. The “Islamic State” has only two options for the Yazidis, “convert or die.” They have also taken to selling Yazidi girls into sexual slavery.

It is very important for the world to know about the Yazidi people, what they are going through, and the beauty that their religion truly represents. The fact that they celebrate a colorful, peacock of an angel as a bringer of knowledge and life speaks volumes about their core beliefs – even if most of their religion is transmitted by word of mouth, rather than the written word. These are a people who have a rich and colorful tradition that masked men in black are attempting to destroy. Let us do well to understand, support and pray for these people in their hour of need.

Yazidis in the Encyclopedia of World Cultures