Why Pixar’s “Brave” Movie Should Be Called “Pride”

The bears I surveyed gave this movie a C+. 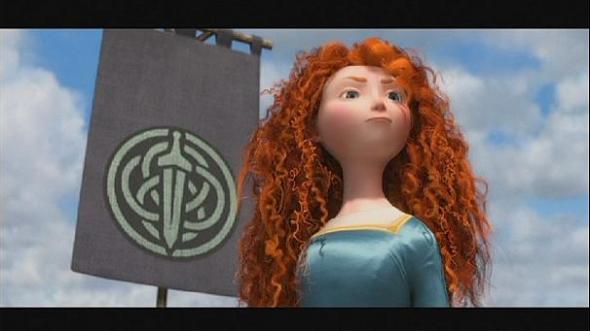 There were two reasons I was initially excited to see this movie: a fascination with Ancient Celtic Myth and the fact that this was Pixar’s first movie with a female protagonist as the lead. Yet watching this film left me feeling like this was the “C” student who I was expecting to make an “A.” On this blog, I admit to feeling silly for criticizing a movie made for children. Over all, the movie wasn’t terrible. I still walked away from it being somewhat entertained. But there was also something about this movie that left me feeling frustrated.

I feel like “Brave” was Pixar’s attempt to make a strong female character, since they have been criticized for being something of a “boy’s club.” Yet instead of coming off like a strong, female Celtic warrior the likes of Boudicca (a woman who destroyed three Roman towns and nearly kicked the Romans out of Britain), Merida – the lead – remains a prissy, self entitled teenager who seems more likely to whine about doing her math homework rather than leading her clan to greatness.

NOTES ON THE MOVIE ITSELF

Brave itself is a movie that takes place in an idealized 10th century Scotland. The animation and scenery is remarkable, in this aspect, Pixar does not disappoint. Directors Mark Andrews and Brenda Chapman both also have Scottish roots, which gives the film some authenticity.

The beginning of the movie seemed promising. Merida is a princess with remarkable archery skills. She wants to be a powerful warrior like her father, King Fergus. Yet she remains trapped by her mother with the responsibilities and traditions of being a “prim and proper” princess who doesn’t “put her weapons on the dinner table.” Eventually the day comes when it is time to marry Merida off to the future leader of another clan. Politically successful marriages were vitally important to the survival of a clan. These marriages were key in bringing peace to two different clans that may have ended up declaring war on one another. The Ancient Celtic Goddess Brigid herself played an important role in bringing peace to two warring tribes after her son was killed in battle.

Different clans come together in order to compete for Merida’s hand in marriage. The sons of all the clan leaders end up being quite unsuitable – suitors. In cliché movie fashion – they are all miraculously a bunch of bumbling doofuses who can’t tell an arrow’s tail from their own faces. I understand the element here was to introduce comedic relief. Yet I found it incredibly disappointing that ALL of the men in this movie were incompetent. The mighty king Fergus can’t even give a speech without his wife’s assistance. This element made the movie more frustrating and stereotypical than funny in my opinion.

The reality is that the Scottish clans of these times had an intense focus on warfare and raising up powerful warriors. The son of a clan leader would’ve trained his whole life in different skills of battle: sword fighting, archery and hand to hand combat. The idea that all the suitors would be this incompetent is just as insulting as it is stupid. But then again…I remind myself that this is a kid’s movie and I must suspend some expectation of reality here…

With a lifetime focused on physical training, like throwing logs and boulders, it’s likely that the Scottish Suitors may have looked something like this. Heart melts! Merida, if you don’t want any of the suitors, I’ll take all four. Mwahhaa!

Merida ends up competing for her own hand in marriage – which violates all protocols of tradition – and wins. This horrifies her mother – the Queen – and increases the rift between the two. After a fight, Merida ends up running away. At this point in the story, I was expecting some heroic adventures and deep life lessons. Instead we get some wacky hijinks where Merida ends up using a witch’s spell to “change her mum” – the most vague request you can make of life altering magic – and ends up turning her mother into a bear. This is bittersweet considering that King Fergus is a mighty bear hunter.

Perhaps there may be some mythological significance to this transformation considering that shape shifting magic was a common theme in Celtic Mythology and that Artio herself was a mighty Bear Goddess.

However, getting back to the movie plot, the rest of the movie tediously makes its way through Merida trying to turn her mother back into a human. There are a lot of shenanigans that ensue which provide some slapstick humor and some clumsy plot development.

BRAVE IS NOT SO BRAVE

(Now that’s what I call Brave!)

Our heroine also does not prove to be very “brave” either. When she comes close to having a fight with a real bear she ends up screaming and curling into a ball out of fear.

Eventually Merida discovers that she must “mend the bond destroyed by pride.”After this revelation, I was hoping some life lesson would emerge about the destructive effects of pride – but in the end this was all muddled by some vague lesson of each person being allowed to choose their own path. Merida does not end up getting married, the unsuitable suitors go home, and there is not much clear indication of what happens to the rest of the clan as a result.

The reality is that the clans would’ve probably declared a brutal war on one another, destroy their alliance and bloodshed would ensue. Merida’s actions did nothing to benefit her people or her family. The desire to doom the future of one’s entire clan for one’s own selfish interests is not “brave,” it is selfish and “prideful” and frankly is a perfect description of what is wrong with modern values today. Actual Celtic history is replete with tales of women who knew how to fight – and there were women who even had their own fighting schools. Yet most Celtic men and women did what was good for their tribe and not necessarily what was best for themselves. If we are to learn from the past, we must learn to do what is best for those around us – not simply living for our own selfish ends.

I think the problem here is that the boys at Pixar really had no idea how to develop a powerful female lead. They couldn’t conceive of an independent and strong female without also making her selfish and prideful, not really heroine material. A good character is also someone who has some kind of challenge to overcome. I suppose the challenge here was to mend the bond torn by pride – but she didn’t really end up making any major sacrifices or concessions for her prideful behavior. She was also a great archer from the get-go, so there wasn’t really much to develop on that end either.

WANT TO A GOOD KID’S MOVIE ABOUT A FEMALE HERO?

A much better children’s movie about a strong female lead was Mulan. She joined the army not out of some childish fantasy, but in order to save the life of her father, who was becoming too old to realistically defend himself in armed combat. She also isn’t a “Mary Sue” who ends up miraculously being good at combat either. Mulan was somewhat clumsy in the beginning and actually has to train and work hard in order to become a powerful warrior. In the end, she makes tough decisions and harsh sacrifices in order to save the nation of China. What’s even better, is that Mulan the Disney movie was actually based off a true story.

While Mulan was fighting to save the nation of China from Hun invasion and inventing clever war tactics, Merida was busy throwing tantrums and getting freaked out by Bears.

WANT TO SEE SOME STRONG CELTIC WOMEN WHO ACTUALLY EXISTED?

Check out my page on the topic.

This entry was posted on August 19, 2013 by Metalgaia. It was filed under Celtic, Movies, Reviews, Uncategorized and was tagged with brave, Celtic, movie, mythology, review.