Most Westerners these days take what is called a “Binary” approach to problem solving.

No, they don’t speak in “0’s and 1’s.” What I mean is that most debates and decision making approaches split a matter into two separate options (whether it be political, religious or philosophical). Then the debaters must choose one side or another.

Even in the judicial process, Supreme Court cases that decide major Amendments to the law are ______ vs. _____ (Roe v. Wade) for example.

Often times these options become opposites and are even assigned moral labels. “Good” vs. “Evil.” (A Christian Influence no doubt).

The first number that guides thinking into balance is the number three. Divisions into three are called ternaries. Every ternary, according to this teaching, consists of two things opposed to each other, and a third that connects them. Thinking in ternaries considers both differences and similarities (The Druidry Handbook, Michael Greer).

Ternary thinking is inspired by the three elements in the Celtic Mythos: Earth, Air and Water. 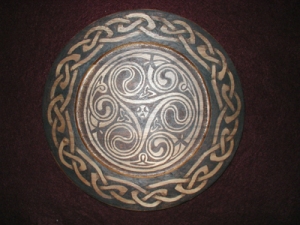 Three is the smallest number needed to achieve balance. A three legged stool will hold you up, but if you sit on a stool with only two legs you’ll fall down.

So next time you’re about to throw punches in a philosophical or religious argument, it might be better to find the middle ground between your two opinions – rather than crashing to the floor like a two legged stool.

This isn’t to say that Ternary is the best and only way to solve all life’s problems. This is also not to say that it is the only number druids and Celts use to approach life. But it is definitely something worth trying out and contemplating.