9 out of 10 Vikings Approve This Book

(I couldn’t find a good picture of the book on the internet, so I just used my webcam)

Get “Living Asatru” on Amazon

This is a great short, simple and affordable book on the religion of Asatru. It is a total of only 88 pages, but covers a lot of territory. It gives a basic overview of the Norse Gods, The Lore, The Runes, Customs, The Nine Noble Virtues, Holidays and pretty much anything that you should know if you want to call yourself a follower of Asatru. This is a great little handbook to have at your side if you are either just starting to learn about Asatru or want to review the basics.

It would take me forever to explain the basics of Asatru, so I’m just going to delve into my favorite parts of Shetler’s book. He stresses the fact that this is not an authoritative source on Asatru, but merely an interpretation. It’s not a bunch of commandments carved in stone, it’s a set of guidelines for living. After all, the book is called “LIVING Asatru.” My favorite part of the book is Greg’s discussion on ethics. I won’t go into all the details, you can buy the book if you want that, but I will go over some of the key concepts covered by Shetler – in terms of how to live an ethical life as an Asatruar.

According to Shetler, Örlög is a partly inherited and partially self developed component of the soul which is strongly influenced by fate. “The Örlög was determined independent of man’s laws, and is based entirely on the results of one’s actions (page 27).” Shetler goes on to say that while Örlög sounds like Karma, it is different. “While karma is distinguished by ‘good’ and ‘bad’ karma…Örlög is independent of these things.” Basically, the actions you take will cause results to happen to you – Duh! If you are honorable, you will find yourself surrounded by honorable people and if you are dishonorable, you will be surrounded by dishonorable people. If you eat that tempting, but expired hot-dog you bought at a gas station, you might get sick.

Your Örlög is your “spiritual momentum.” So what is “right” or “wrong?” Shetler says that “there are no such things (page 27).” What there is instead, is acting in a way that makes you desirable to society. If you think about it, every society has had similar – but different ideas of what is right and wrong. So there isn’t an absolute set of rules of what is “good.” Rather, we all try to act in a way that is most beneficial to our kinsmen. That brings us to our next concept.

Frith is our obligation to the welfare of others. Frith itself is a kind of “peace.” This isn’t the same as a total lack of violence. Rather, it is a commitment to acting in a way that will prevent your actions from having a negative effect on those you owe frith. So who do we owe frith? Shetler explains that while we owe frith to varying degrees to all the living things around us, our blood-kin are owed the greatest frith of all. Below our blood relations are members of our “tribes.” “In modern society, we each tend to live in a number of tribes all at once – our schools, clubs, employers, sports teams and circles of friends (page 31).” The more we move outwards, in terms of how close the relationship is, the less frith owed. For example, you owe more frith to your mother than the neighborhood delivery guy. Now, you should still be nice to the delivery guy, because he effects your tribe to some degree (getting your package on time and so on), but if you had to make a choice between saving your mother’s life or the delivery man’s life, you would obviously choose your mother. In frith, the greater obligation takes place over lesser obligations.

How All This Applies to Ethics 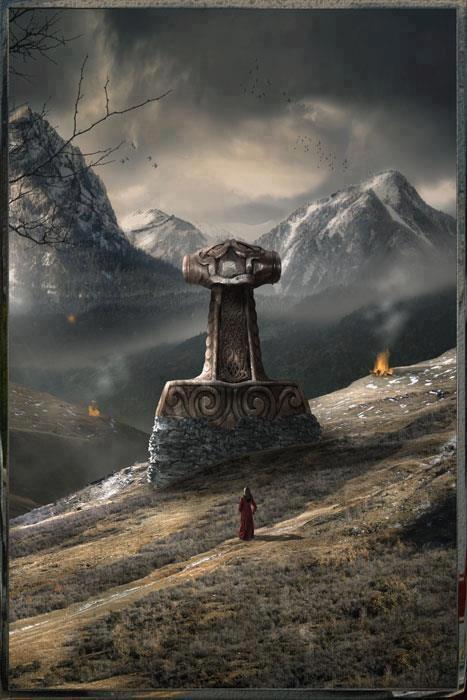 What I enjoy about Shetler’s book is that he presents a common sense approach to morality. For example, the ten commandments present an “absolute morality” literally carved in stone. “Thou shalt not kill” is one of the Ten Commandments…and yet the bible is replete with tales of God’s people killing other people. Shetler argues that real life ethical situations are much more complex than a simple “thou shalt not ______.” Ethics in Asatru, according to Shetler, is connected to frith. What actions are the most beneficial to your kinsmen?

Now with killing, Shetler states that you obviously shouldn’t kill someone for flattening your car tires. In this situation, “the harm you inflict is way out of line with the harm they sought to inflict on you (page 38).” However, if you are in a home defense situation, the considerations are different. The costs of action need to be weighed against the costs of not acting. If someone is simply stealing something, it may be prudent not to take their life. The harm of killing this person may be greater than losing a new laptop. But if they are putting the lives of your spouse and children in direct danger, you might consider taking action.

So, there isn’t necessarily “right” and “wrong” here, but the actions that best reflect your commitment to frith and that have a positive impact upon your Örlög.

Also, by doing what is best for your kinsmen, this doesn’t necessarily mean you should pillage and raid nearby neighborhoods to feed your family. While Shetler recognizes the need that his ancestors had for such activities (poor soil and low resources), modern times are different. We now live in a heavily interconnected world, so our actions in the global community have a greater effect on one another than they did in previous times. Shetler elaborates on this more.

Shetler has many other ethical situations that apply to lying, stealing and cheating, but you’ll have to read the book to see those.

All in all, this was a very helpful and enjoyable book. Many key concepts that I had previously been confused about were made simple. Thanks Greg! If you think you would like this book, you can find it here: “Living Asatru” on Amazon.