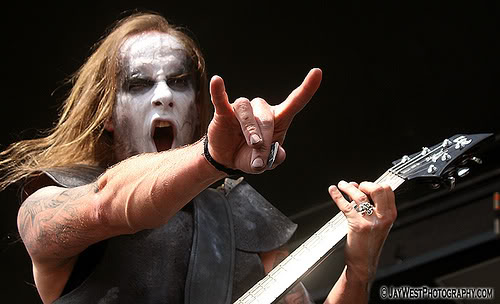 Nergal, the frontman of the Polish Death Metal band Behemoth may face two years of jail time for tearing the pages of a bible on stage.

This is absolutely ridiculous. Anyone who goes to a Behemoth show knows what to expect. I don’t think anyone goes to one of these shows expecting Kumbaya and a bible study. What do they think this is? Bingo night at the Old Folk’s Home? This is mother fucking Behemoth people! Grow up and grow a pair while you’re at it! So someone doesn’t like your religion? Fact of life: there are going to be people out there who insult the things you like! Gasp!

Someone can get on stage, rip up my picture, spit on images of my family and friends and I might get mad. But I would never in this lifetime press for that person to be jailed because they hurt my feelings.

If you have to jail anyone who disagrees with your system to keep it from collapsing – it probably isn’t a very good system to begin with.

More on the story here

WHAT THE POLISH GOVERNMENT IS CURRENTLY TRYING TO DO TO NERGAL