A Shared Spiritual Origin in Celtic Europe and Indo-Aryan India?

DISCLAIMER: METAL-GAIA DOES NOT SUPPORT RACIST IDEAS, SUCH AS WHAT WAS FOUND IN NAZI GERMANY. THIS IS A DISCUSSION OF INDIA, EUROPE AND WEST ASIA’S SPIRITUAL PAST. FOR METAL-GAIA’S THOUGHTS ON RACISM, REFER TO PAGANISM AND RACISM.

The word Aryan immediately has many controversial connotations. Merely speaking the word “Aryan” in most Western countries will conjure the image of Nazis and a flaxen haired, blue eyed people from the north. Yet the reality is that the Aryans (if they did exist as a singular people) were most likely from West Asia, not Northern Europe, and that Aryans were a Hindu topic for thousands of years before the Nazis came along.

The reason why people associate Hindu spiritual concepts like the Swastika and Aryans with the Nazis is because the Nazis appropriated many historical Hindu concepts. Even the swastika that is now famous as a Nazi symbol, was historically a Hindu symbol of well being. The root of the word itself “su” (good) and asti (to be) is a phrase describing well being. In Northern India, the Swastika can still be seen as a prominent symbol today.

So who were the Aryans really? In a historical sense, the word refers to a wave of Indo-European people who immigrated to the  Indian subcontinent during the Iron Ages. In Sanskrit the word itself means “noble.”

While the Indo-Aryans mentioned in the Hindu Rig Veda are a very controversial topic, there are a few reasons why I would like to talk about them today. In the study of Pre-Christian Spirituality, there are many uncanny similarities between Hindu and European Pre-Christian mythos and culture – particularly among the Celtic people. Why is this? One answer is that the people in the Ancient World were communicating with one another more than modern folks give them credit. Cleopatra wore Chinese silks and Buddhist statues have been found in Norse homes. Believe it or not, each culture did not live in its own bubble.

Yet the other answer is that there could be a more direct link between the Pre-Christian European spirituality and that of India. This is the theory that during the Iron Ages, the nomadic Indo-Aryan people dispersed in two different directions – west to Europe and south east to India. The Celts themselves are said to have descended upon Europe from Central Europe or West Asia during the Iron Ages.

While this is still just a historical theory, I do think it is at least worth an in depth discussion. 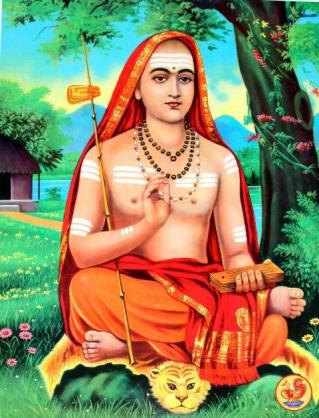 First, there are the similarities between the spiritual structure of Hindu and Celtic society. Both were highly hierarchical societies with a “priest, peasant, warrior” type caste system, where the spiritual authorities were on the top of the social ladder.

Among the Celts, the Druids were the social elite and among the Hindus were the Brahmins. The very name “Druid” is composed of two Celtic word roots which have parallels in Sanskrit. In Sanskrit, the root for knowledge “vid” appears in the word “veda.” The Celtic root “dru” which means “immersion” also appears in Sanskrit. So a Druid theoretically is one who is “immersed in knowledge” (Druidism and the Ancient Religions of India).

In both societies, Brahmins and Druids weren’t just mere priests, they were a social caste.  Among the Celts, the Druids were a complete intellectual caste comprising of judges, lawyers, medical doctors, ambassadors, historians, etc. The Brahmin caste more or less was the same in this respect.

‘Boudi and the stem budh appear in all the Celtic languages. It means – all victorious, gift of teaching, accomplished, exulted, virtue and so forth. In Breton today, for example, boud means ‘to be’. You will see the stem in the name Bouddica, more commonly referred to in English as Boadicea, the Celtic warrior queen of the Iceni who led an uprising against Roman rule in 60 AD The important thing is that the word occurs in Sanskrit and Buddha is the past participle of the stem budh, to know or enlightened. This is the title given to Sakyamuni Gautama – the Enlightened One. What is important is that in the Vedas the planet Mercury is also known as budh.’ [Beresford-Ellis in the same article notes: The idea that these ‘signposts’ might lead to the fact that ancient Celtic astrology and Vedic astrology also had a common link, another surviving parallel, was thrown into sharp relief by a small gloss on a 9th Century Irish manuscript at Wurzburg. The word budh was glossed by ‘point of fire’ and ‘planet Mercury’.]

Here are other examples of a similar vocabulary:

Some of the examples listed in this section are from the Bards, Ovates and Druids website.

In terms of mythological similarities, there is a striking similarity between the Norse and Hindu concept of world creation. The Purusha Sukta, a hymn in the Rig Veda, states that all things were created from the mangled limbs of the titan Purusha. In Norse Mythology, the belief is that the world was made from the body parts of the titan Ymir.

‘Celtic cosmology is a parallel to Vedic cosmology. Ancient Celtic astrologers used a similar system based on twenty-seven lunar mansions, called nakshatras in Vedic Sanskrit. Like the Hindu Soma, King Ailill of Connacht, Ireland, had a circular palace constructed with twenty-seven windows through which he could gaze on his twenty-seven “star wives.”
There survives the famous first century bce Celtic calendar (the Coligny Calendar) which, as soon as it was first discovered in 1897, was seen to have parallels to Vedic calendrical computations.’ Early Irish Astrology: An Historical Argument  by Peter Berresford Ellis. (Order of Bards, Ovates and Druids)

“For a long time the Gundestrop Cauldron has been hailed as one of the most beautiful examples of Celtic art, made in Thrace but found in Denmark. It is now considered possible that the image of the horned god is that of Pasupati, a Shiva prototype, found in the early Indus Valley civilization. Certainly a seal from the ancient city of Mohenjodaro in the Indus Valley looks remarkably like the scene depicted on the cauldron. Compare the cauldron image below with that of the Pasupati figure from Mohenjodaro, 2300-1750 BC.” (Order of Bards, Ovates and Druids)

Shiva Pashupati (seal discovered during excavation of the Mohenjodaro archaeological site). Pashupati means “Lord of Animals” in the Sanskrit language.

This is an image of the Gaulish/Celtic God horned God Cernunnos. Cernunnos is also a God of the hunt and animals.

This image itself was found in Denmark on the Gundestrup Cauldron which dates around 200 BC to 300 AD. What is interesting is the yogic posture that this God is sitting in. Or this could merely be a representation of the Celtic culture, since Classical writers report that the ancient Gaulic Celts did not sit on chairs, but were usually found sitting on the ground, either in a crouching position or cross legged.

Among the ancient Celts, Danu was regarded as the “Mother Goddess.” The Irish Gods and Goddesses were the Tuatha De Danaan (“Children of Danu”). Danu was the “divine waters,” which fell  from heaven and nurtured Bíle, the sacred oak from whose acorns their children sprang.

Moreover, the waters of Danu went on to create the great Celtic sacred river–“Danuvius”, which today is  called the Danube. Many European rivers bear the name of Danu–the Rhône (ro- Dhanu, “Great Danu”) and several rivers are called Don.

Rivers were sacred in the Celtic world, and places where votive offerings were deposited and burials often conducted. The Thames, which flows through London, still bears its Celtic name, from Tamesis, the “dark river”, which is the same name as Tamesa, a tributary of the Ganges.

Not only is the story of Danu and the Danube a parallel to that of Ganga and the Ganges, but a Hindu “Danu” appears in the Vedic story “The Churning of the Oceans,” a story with parallels in Irish and Welsh mytholgy. Danu in Sanskrit also means “divine waters” and “moisture.”  (SOURCE: Hindu Wisdom). 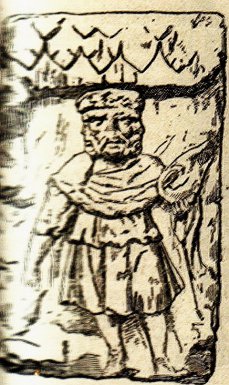 Gods with three aspects are popular among both the Celtic and Puranic Hindu spiritual traditions. In Hinduism, there is the obvious trinity of Brahma (The Creator), Vishnu (The Preserver) and Shiva (The Destroyer). Among the Gaulish Celts there is the triune God Lugus. There is a theory that his three aspects are Esus (The Respected one), Toutatis (Protector) and Taranis (God of Thunder). I’m not saying there is a direct parallel between these two trinities, I’m just saying that the similarities are interesting to observe.  The Celtic Goddess Brigid is also a triune deity of warfare, healing and smithing.

BELIEF IN REBIRTH AND TRANSMIGRATION OF THE SOUL

It is well known that Hindus believe in Reincarnation as well as the idea of karma.  While our understandings of the Celtic afterlife are less well known, there is evidence that the Celts believed in reincarnation for their heroes. There is also a great deal of shape shifting in Celtic myth in which people go through various animal forms.

WEREN’T THE IRISH CELTIC CULTURES TOO FAR AWAY FROM INDIA TO BE RELATED?

One interesting thing to consider is that the Druidic Irish spirituality has more similarities with the Vedic religion than other Europeans – even though they are the Europeans most far away from India. Why is this?

It is believed that the ancestors of the Celts spread all the way from West Asia to Ireland during the Iron Ages. However, when the Romans started taking over large chunks of territory in the Middle East and Europe, much of the culture from the Indo-European invaders was lost to the Classical Greco Roman culture that replaced it.

SO IS THE CELTIC/VEDIC CONNECTION REAL?

At this point historically, we cannot be sure. There is no absolute proof as of now to support this theory, even if there are many uncanny connections.

What we know is that the Vedas describe the Aryans as a nomadic, spiritual, hierarchical and warlike people. Racially or culturally these people may have spread their spirituality beyond India in ways that we currently don’t historically understand.

While I can’t deliver some kind of ultimate sweeping conclusion on the matter (few people can with matters of ancient history), I hope this article was interesting food for thought and will stimulate further debate on the topic. Sometimes we can learn more from questions than from answers.

If you are interested in the Vedas, here is a famous and beautiful mantra called the Gayatri mantra:

Meet the Brahmins of ancient Europe, the high caste of Celtic society

In a Forest of Gods

The Forest is Everything. Without it, we will have nothing.

Watch this episode of Taboo for a more in depth look at the existence of multiple genders in Indian, Indonesian and Albanian culture.

Yet in some cultures around the world, there are more than two accepted genders.

In India there is a third gender: The Hijra, men who cut off their genitals and live like women.

In parts of Indonesia there are five genders.

In Albania, a woman traditionally could forsake her female gender in exchange for male duties and responsibilities.

In the cultures that accept other genders – this other gender is often endowed with a spiritual significance. People with both male and female gender have a certain relation to the Gods that heterosexuals with their one gender do not.

I believe that in indigenous cultures there is more acceptance – and even an embrace of such sexual diversity, because this is only natural. After all, if nature chose you to have a unique gender, that is a destiny chosen for you by the Gods. Do not be ashamed. You are a product of the natural world and thusly beautiful as you are.