Interview With a Yazidi Kurd

Recently I was contacted by a 28 year old Yazidi Kurd who lives in Germany. She told me interesting things about her experience as a Yazidi, including the fact that she believes in many gods, finds the four elements to be divine, and she says that the Yazidi people can trace their origins to Iran. She was kind enough to answer some of my questions about her faith, and the rest of what I have below was written by her:

The name Yazidi is derived from the old iranian word “Yazata” which simply means “divine beings”. But you should also know that the Majority of us calls themselves “Shemsani” which means “Sun worshippers”. The four Elements Fire, Earth, Water and Air are holy for us. But the Center of the Yazidi Religion is the Sun. That is why the Sun God is the most prominent. 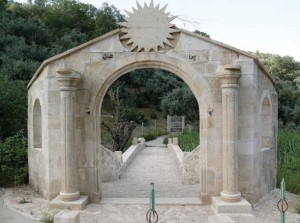 And yes, we have many Gods. The most important Gods are the seven Gods. The seven Weekdays and the Planets are dedicated to them. We are of the opinion that the Monotheists relegated the Gods to the so called “7 Archangels”. They are also many other Gods and Goddesses (Xwodan). Like the female Gods who are responsible for healing of diseases or fertility. But I have to say that the Gods have more importance among our Elders and are not really important among young people.

Mithra is the old Iranian God of the sun, justice, contracts and war whose name changed many times throughout history. He is the center of the Yazidi Religion. The Lalish Temple in Sinjar is nothing more than a Mithraic Sun Temple. The Domes of the Temple look like Sunrays and the Mithraic Symbols at the Temple are hardly to ignore.

The Yazidis turn their faces towards the sun and pray to honor Mithra. Also many older Yazidis have the sun as a tattoo and the Lalish Temple is full of solar symbols. We never kneel when we pray, unlike the Monotheists who kind of behave like slaves. We think that the we and the Gods are equal. Of course many people find this arrogant.

First of all the Kurdish Name for Fairies is “Horiyan”. For us they are the epitome of beauty. Therefore we use the proverb, “She is beautiful like a Hori” to describe a beautiful girl or a woman. We believe the fairies live in deep forests and the little people live under the grass. Our Elders have many stories how they saw them and that it was something pretty normal for them. The sightings that our Elders describe are similar to old German stories about fairies. Also, before our Elders pour out hot water anywhere, they send a warning (it´s kind of a prayer) to the little people so they can hide themselves at the right time to avoid being injured. We are doing this ritual still here in Europe.

Then we have the forest spirits. With forest spirits we mean the spirits of the trees and any other plants. I can describe you how the people of my parents native village interacted with trees. First of all the Kurdish Areas are literally “Garden Eden”. Everywhere fertile ground, trees, water and plants. Kurdish villages are built so that every household has a tree in the garden. In case of my parents native village it was exactly like that. So my Mother grew up with “her tree”. Almost everyday she lit the candlesticks for the tree to honor him. She also decorated the tree to make him pretty. Of course it sounds like Christmas, but of course you know that the so called “Christmas Tree” is of Pagan origin.

She sat under the tree, touched the tree and the leaves and made sure that it was always clean around the tree. My Mother called the tree “her best friend”. That was the interacting. The tree was alive and and practically a real person. Interesting is that the Yazidis believe that trees are always of male gender. But unfortunately I don´t know the story behind this.

Another important thing is that the Elders of the Village made sure that nothing was built on the areas of the little people or the Fairies. They are absolutely real for us.

LIFE FOR A YAZIDI IN GERMANY

Yes, I still practice the Yezidi Religion myself. The main Reason is that I luckily I belong to the Yezidis who grew up in a full pagan household. Thankfully my parents showed me the true meaning of the Yezidi Religion. I have a terrarium with a waterfall and trees in my bedroom. It reminds me of a beautiful forest. I also have many orchids in my bedroom because they are gentle. We also have a beautiful garden, but the garden is more like the job of my Father.

We have an altar in the living room with red candles and different flowers. It depends on the season. My family also celebrates the “Red Wednesday” and the “Winter Solstice”. I wish I could be more pagan but it`s not easy here. In the homeland, mostly in the famous “Zagros Mountains” the Kurds live the Pagan Religion the right way.

First of all I feel privileged to live in Germany. It´s the land of the poets and thinkers. Germany is good to me and my Family. And I´m proud to speak the German language and read the German literature classics in the original language. There´s nothing better than that. Although we are not really voluntary here. I have to say that my whole Family doesn´t really look middle eastern. My Hair color for example is red-brown, my eye-color is light brown and I´m extremely pale. Maybe the life here is easier for me because of this? I really don´t know.

Thank you Nesla for sending me this information. It was a pleasure.