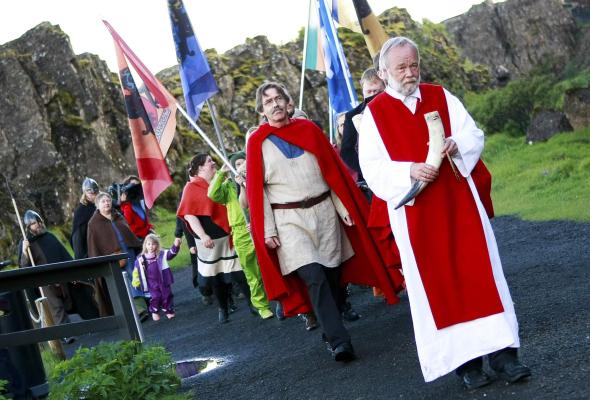 Ásatrúarfélagið website (The group for which the temple is being built)

For the first time in 1,000 years, a temple to the Norse Gods will be built in Iceland. Most pagans these days tend to worship in each other’s houses or outside somewhere, since our numbers are pretty low. So this will definitely be a historic landmark for Iceland – if not for the whole Pagan community in general.

Icelanders will soon be able to publicly worship at a shrine to Thor, Odin and Frigg with construction starting this month on the island’s first major temple to the Norse gods since the Viking age.

While the number of Norse Pagans is small in Iceland, the rate of growth itself is pretty large. The number has tripled in the last decade. So it makes sense that a temple will be built to accommodate this growing community.

This temple will be a place where weddings, funerals and initiation rites will take place.

After 1,000 years of oppression the old ways will re-emerge once again.

Is Paganism the Fastest Growing Religion in the U.S?

This entry was posted on February 2, 2015 by Metalgaia. It was filed under All, News, Norse, Pagan, Spiritual and was tagged with 1000, Iceland, new, norse, Old, pagan, return, temple, ways.