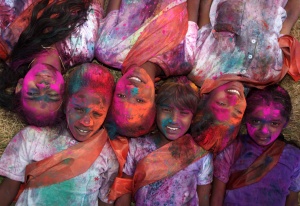 Happy Holi! Today is a celebration of Spring for Hindus. It takes place on the day after the full moon in the Hindu month of Phalguna (Early March). In order to celebrate the colorful nature of springtime, many Hindus throw colored powder at each other in this fun filled festival. 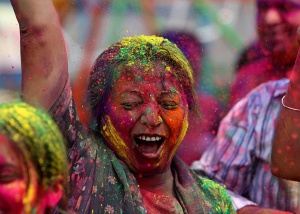 Where is it celebrated? Primarily India and Nepal. However it is also celebrated by minority Hindus in Bangladesh and Pakistan, as well as Hindus in other parts of the world. 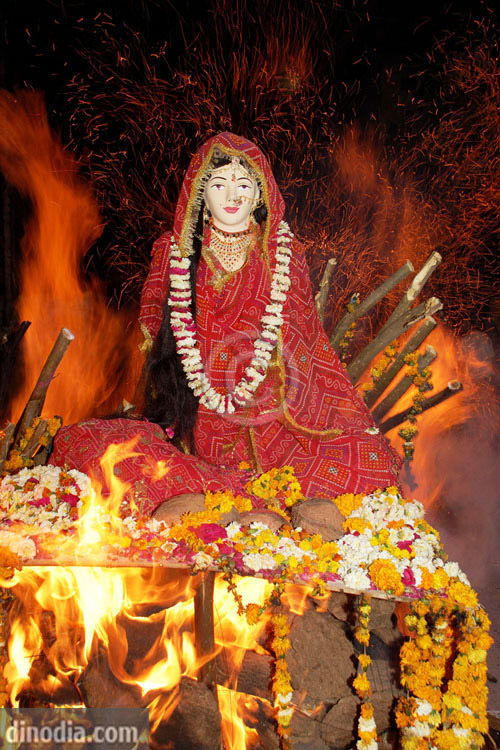 What is the story? The word “Holi” comes from a female demon who burned to death in order to save her Nephew Prahlad. Prahlad’s father Hiranyakashipu was an evil king who forbade his son from worshipping Vishnu, but he did it anyways. Getting angry with his son, Hiranyakashipu challenged him to sit on a pyre of fire on the lap of his aunt Holika (who was believed to be immune to fire).

However, when they went into the fire, Holika burned to death and her nephew stayed alive. Afterward, Holi became a festival to celebrate Holika’s sacrifice. There are other variants on the story which you can read here if you are curious. 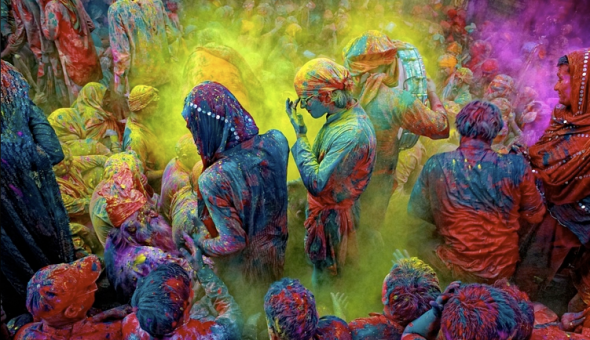 How is it celebrated? Holi is usually celebrated for 2 days (longer in some places). It is a loosening of social restrictions between castes, men and women, status and age. A common phrase during this holiday is “bura na mano, Holi hai,” or “Don’t be offended, it’s Holi.”

A public bonfire is held on the first evening of Holi to commemorate the burning of Holika. The fire is lit around 10 pm and midnight at the rising of the full moon.

The main ritual is the throwing of colored powders and water at friends and family, which is why it is called a “Festival of Colors.”

This entry was posted on March 26, 2013 by Metalgaia. It was filed under Hindu and was tagged with festival, holi, movie, scene.